EQ & You – Why digital software is important for mixing music

Last time we were here, I was discussing some of the benefits of digital software. I originally wanted to change the topic for this installment and get into some comparing and contrasting. But for now, I’d rather expand on why digital software is beneficial, specifically for mixing music.

Mixing is the process that is completed post recording to make the song sound as even as possible. It’s basically adjusting volumes, frequencies and adding any necessary effects and edits to the song to make it complete. Once mixing is complete, then the final post production step is mastering. Popular recording programs, such as Pro Tools & Logic, are equipped with a variety of stock effects. If these effects are used correctly you can actually get an industry standard mix, straight out of the box. While there are thousands of additional plug-ins and effects that you can purchase, theres a few valuable effects that come standard in most recording softwares.

I’d like to focus on EQ, which is short for Equalizer. EQ’ing gives you control of the frequencies in a sound, ranging from Low to High, which is displayed from left to right. Many people are familiar with some sort of an EQ. Looking back at old tape & CD players, many of them came with EQs in the front, typically displayed as a series of faders that you can adjust. Even in a popular software today, such as iTunes, there is an option to pull up an EQ window and adjust the frequencies. 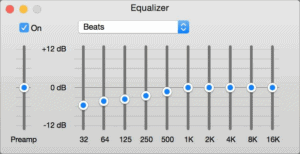 EQing can be done extremely basically, or all the way up to an almost rocket scientist level. I don’t want to dive too far into this, but I do want to leave you with a rule of thumb that can be applied with almost any vocal recording on standard software. It’s called low-cut or low-pass. What this does is allow you to round off some of the lowest frequencies in a recording. There’s certain frequencies we can’t even hear clearly, but they can contribute to the muddiness of a recording. Adding a low cut anywhere between the 1-100khz range on an EQ can almost instantly clean up a vocal recording. There’s no correct number to EQ at, so trial and error is sometimes the best approach to take until it sounds right to you. Different recording call for different techniques almost on a case by case scenario. While there are other frequencies from the mid-high range that you can enhance or decrease, I always apply a low cut to a vocal recording. Once you develop more of an ear for EQing, you’ll be able to eliminate more unwanted frequencies, but a low cut is a rule of thumb for me when it comes to mixing vocals.

Thank you once again for joining me and I look forward to continuing our discussions about digital recording software!