The Molecule of More by Daniel Lieberman & Michael Long

Welp, if I were a psychology professor, I would definitely make this book a requirement for all my students. Although I am not said professor, I do wish all of us would read this book. It gave me a much deeper understanding of the roots of addiction in all forms, as well as what drives people to do the things they do and to what degree. What is this molecule of more? Dopamine! Many call it the pleasure molecule. However, this is not the case. It is more of a reaction to the unexpected and desire for pursuit of pleasure rather than actually having those things… whether it be falling in love, drugs in all forms, awards and achievements, etc. 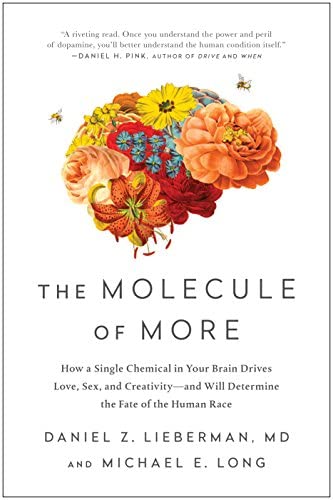 Why didn’t I have this book during all the years I lamented over the couple of 3-month long relationships that didn’t last? Oh, the turmoil of trying to figure out why my heart had to break after such short time periods. This book put it simply that the dopamine did not get a chance to wear off, and it will ALWAYS wear off at some point, no matter how fiery the romance.

Lieberman and Long talk about the two areas of the brain, one called the Peripersonal space (the “here and now”) and the other, Extrapersonal space (future and desire, where dopamine lives). Those fiery romances definitely lived in the extra personal space of my brain. So much passion lives here! In order for relationships to last though, it must move into the Peripersonal space, which turns into companionate love. Taking care of your existing things.

Dopamine knows no boundaries in its pure state, it simply always wants more. There is no finish line. This is why individuals driven towards addiction tend to not have any real pleasure after the initial hit. Yes, this includes overachievers. The authors talk about the difference between wanting something and liking it. If you say something is “important” that comes from a link to dopamine, and focuses on future possibilities. When the novelty fades so does dopamine. On the opposite end, if someone has an excess of dopamine, it causes a wave of emotions. In such a way that it disrupts critical thinking skills, analyzing, and functional memory. The extreme version of this would be schizophrenia and other mental illnesses.

Dopamine has been essential in our evolution. Creativity is the most durable of the dopaminergic pleasures because it balances the “here and now” along with the dopamine. It is the power to connect the seemingly unconnected, as told by William Plomer. Albert Einstein was a great example of an incredibly dopaminergic person, which made his contributions to the world incredibly important. However, that also spilled into his personal life, which, predictably, involved many extramarital affairs and broken relationships.

Creativity is truly the brain at its best

Dopamine balance is maximized by the mastery of something. So, guess what? Learning an instrument, writing music, as well as teaching music, seem to be some of the very best things we can do based on the deep science and examples throughout this book. In order for our species to survive and thrive, we must overcome the need for constant entertainment coming at us. Our brains are like a garden and we must care for them, water them, plant seeds, and nurture them. Achieving the dopamine balance will be the difference in how humans evolve, including continuing to create new technologies to save our planet, cure diseases, and also… make some beautiful music.

Simply put, everything changed after becoming a teacher! I come from a background in music, holding a music degree, trying to use it by performing at night and recording, but working at a bank all day. Boy was I sad after about 10 years at the bank! So one day I walked out of there and took the leap to become a teacher. I have had a few students that have been with me since day one, and one of them, Kayla, is now about to start the training to become a teacher herself, and she is actually a better pianist than I am. Another student, who was my only “grumpy one” that didn’t seem like she wanted to be there, began to really like it AFTER she began singing while playing. The clouds opened up and she likes it now! As for my musical journey, it has made me a better player, and the inspiration to keep learning and growing is something I get directly from the Simply Music program as well as seeing my students succeed. Teaching also allows me to be a stay at home mom and juggle both so that we don’t have to worry about the cost of babysitting. My soul is quite happy, and my life is grand. Thank you Neil!

Katie Schmidt has been a Simply Music Teacher for over 10 years, and also goes by recording artist name Katie Knipp. She resides in Rocklin, CA and is writing music for her 8th album to be released next year. Her previous 3 hit the top 10 Billboard Blues Albums Charts. She has received 2 Sacramento Music Awards for Best Blues Artist, has had worldwide radio support, and plays live with her band at various venues, mostly in California.