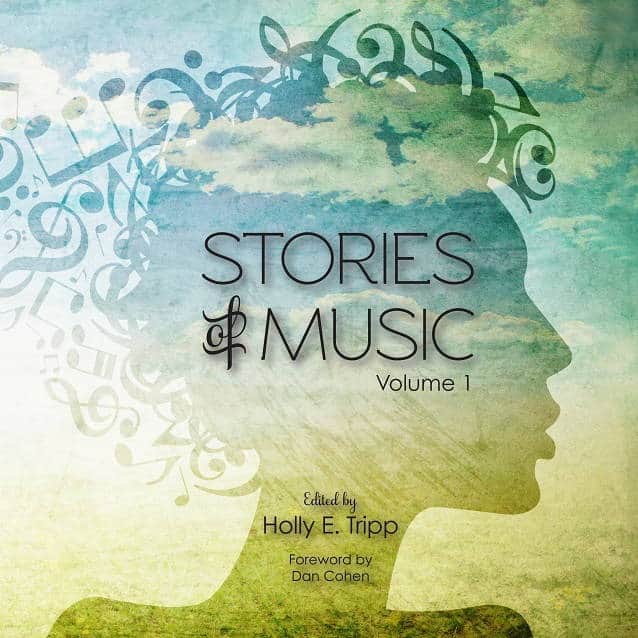 Stories of Music is a multimedia book with heart and soul, telling its tales through poems, pictures, videos, recorded music and text in print and online, and giving something back in the process by its contribution to music-based charities. Publisher and Editor Holly E. Tripp has nurtured a community of people from around the world who have shared their personal experiences for this unique anthology. Rachel Geans shares the immersive experience of diving into their stories, while Mel Karajas talks with Holly about the grand vision behind this ongoing project and the myriad ways music contributes to our lives.

For most people, music is most likely a part of childhood and young adult life, falling in love, a part of heartbreak, a part of weddings, a part of parenthood, of religion, of vacations, of relaxation, of hard times, of losing loved ones, of facing death and of so much more.  So, when we tell others of what has happened in our lives, why don’t we talk about the music?  Reading ‘Stories of Music’ has me wanting to find ways to express more musical thoughts when I talk about myself and my experiences. I plan to add this book to my children’s reading list as it is a fun and interesting way to get them more exposure to cultures other than our own.  Also, the variety of music that I came across in ‘Stories of Music’ inspires me as a piano teacher and early childhood music teacher to introduce my students to more music from other countries and encourage them to learn more about various cultures and religions. This type of knowledge in children’s lives, along with music, can help them to learn acceptance of all people and inspire them to spread happiness and peace.

‘Stories of Music’ is a true multimedia experience – featuring written stories, poems, pictures and songs, many with accompanying QR codes that link you to audio and video works on the companion web edition. You could go through it in various ways. My first time reading it was from front cover to back cover as the Introduction explains how the editor, Holly E. Tripp, organized the stories in a sort of life-progression order. My second read was more rebellious. I jumped around to all of the fourteen picture entries first, recalling what I saw and read from my first time through the book, then read the fourteen poetry entries, then the fifteen written entries and finally listening to the two song entries via their QR codes. These inspired me to scan the other QR codes throughout the book and this ended up being the most enjoyable part for me. Some of the written entries were also on the digital edition, but listening to the amazing music that I had read about in the book, each piece of music with its own origin and roots, hearing some of the poetry being read, and watching videos directly related to a couple of the stories, was thrilling for me. Books with this multi-sensory approach really help me to retain what I read. Going back through the book to read the entries again really solidified each story in my mind too. I used my phone to scan the QR codes and then carried the phone around with me as I went about my day’s activities.  Wherever I was, the sound of the music brought my children into the room. Each piece of music intrigued my children and inspired interpretive dancing from all of us. 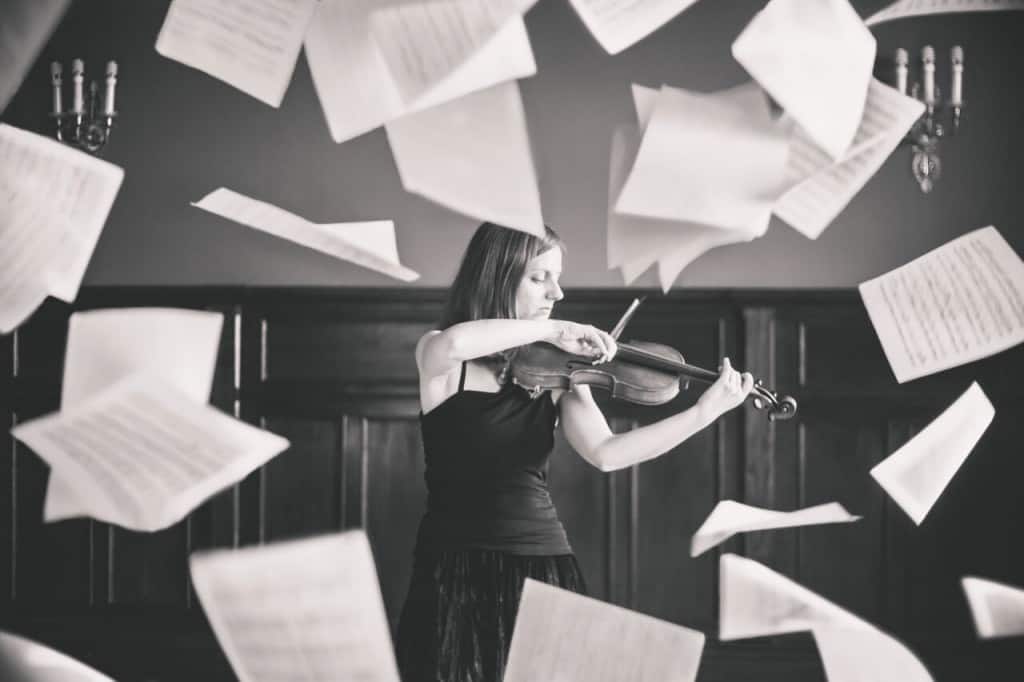 The above image is the first entry in the book, titled ‘Violin Improvisations’. The picture of a young woman playing a violin with music sheets tossed in the air as if to represent liberation from instructions and rules. I like how the shot froze this exact moment with the sheets of music fluttering down in a perfect frame around the player.

I looked at the photographs for some time pondering if I got the same vibe as the text. I found that I could sense emotion and hear the music in each picture, such as with the photograph titled ‘Indian Classical Music’ from a photographer based in Chandannagar, India. The beautiful young woman in the forefront of the photograph is dressed in a decorative Indian style outfit that looks to be special for the performance. Her face portrays sensitivity and desperation as her hands are moving in interpretive dance. I imagine a slow steady beat of Indian style percussive sounds with mournful sounding stringed instruments.

Two photographic entries in ‘Stories of Music’ stand out in my mind.

Pure exhilaration is sensed in the photograph ‘Vic Fuentes’. Fuentes, of the band Pierce the Veil, is shown playing a rock style, electric guitar in a rockers stance that showcases his skilful playing while the flash of stage lights is seen in the photo and confetti is falling all around him. 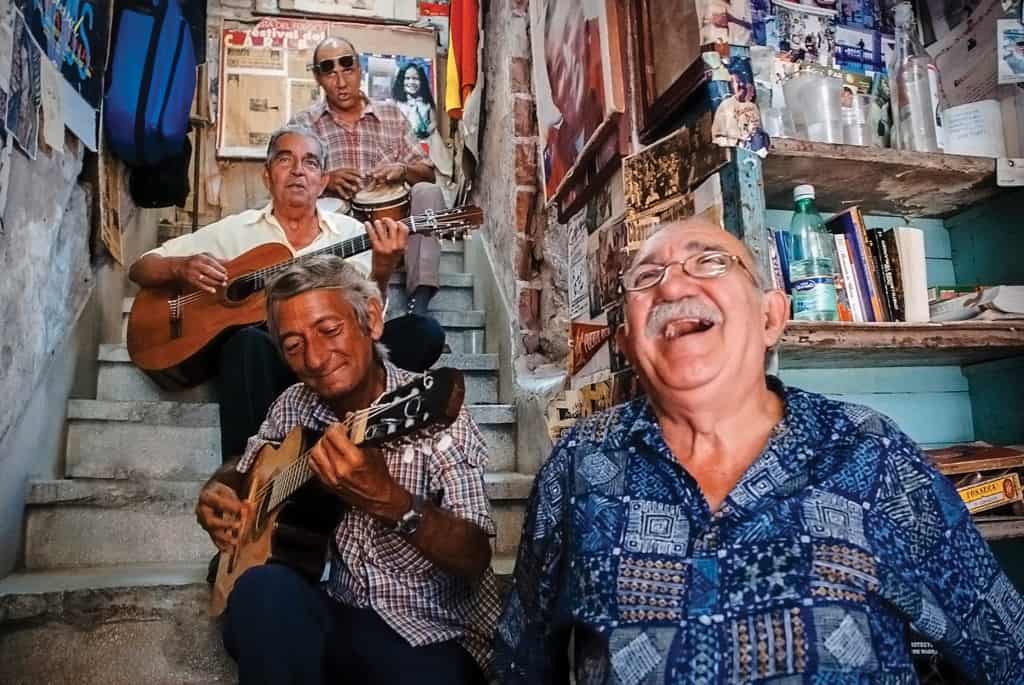 Pure enjoyment of making music is seen in the faces of the musicians in the above photograph ‘Cuban Musicians’. Four men are seen performing a song together on the steps of an entryway. The photographer captured a moment with one man in the middle of a hearty laugh, another with smiling eyes and the others looking joyfully into the music they are making.

The poems also pleased me. Three were particularly memorable. I found For Fourteen Hands to be so neat and interesting, Metronome to be emotionally touching and What But the Music to echo my view that music is a part of everything.

‘For Fourteen Hands’ is a video of a group of women from the Vanuatu Islands using their hands in water, against waves, to create percussion sounds which when played simultaneously created incredible cadences.

‘Metronome’ uses musical language to describe a baby’s heartbeat in the most lovely way, as well as using musical terms to depict the sounds of the medical machines needed to fix this baby’s heart ailment. The baby’s surgery scars fade and an even rhythmed heartbeat is as lovely to the ears as music is.

‘What But the Music’ tells of how music touches everybody in one way or another and how there is a soundtrack to life that will never stop even after lives end.

I appreciated the QR codes that go along with a few poetry entries in the book too. To be able to hear a poem read by its author was so neat. The multi-sensory approach is almost magical with ‘Swans’. Reading the poetry, hearing it read by the author, feeling the emotion, hearing the music and hearing the story behind it allowed me to visualize the scenes told of in the poem as if I was there.

The two song entries in ‘Stories of Music’ are ‘My Heart Still Thinks of Yesterday’ by Lapis and ‘Exodus’ by Julia Price.

‘My Heart Still Thinks of Yesterday’ is a classical Hindustani piece which blends tempos and sounds.  There aren’t any words to the song but it can still tell a story according to one’s interpretation.  Although I felt that it was an upbeat song with happy sounding phrases, the written description says it is based on the feelings that go along with being forced to separate from comfort or love.

‘Exodus’ is a laid back, groovy song. It’s beginning and end are surreal feeling with the echoing voice heard speaking words of spiritual ideas.  While listening to ‘Exodus’, the hypnotic spoken words led my imagination to thoughts of departing Earth’s reality. The music in the middle encouraged me to dance.

The written stories in ‘Stories of Music’ also dealt with various styles, cultures and musical topics but all tell of how music works in people’s lives.

“It’s an opportunity to get our collective experiences together and showcase just how amazing music has been for people” – Holly E. Tripp

‘Lifting Spirits During the Vietnam War’ is an interview with a member of a group of sorority girls who performed for soldiers, bringing happiness, smiles and laughter on their three tours overseas.  They all felt that this made it totally worth it despite the obvious dangers.

‘My Last Mix Tape’ is a story of a young woman who works through the grieving process of losing her brother by creating a mix tape for his funeral.  She tells of how hitting pause and record and watching the tape wind up inside the cassette felt therapeutic and how it wouldn’t have been the same therapy if she were to put together a compilation of songs with today’s technology.

‘Bluesman in Bosnia’ is a truly inspirational story of how a man named Milo Tiro works so hard to bring people back together in his hometown of Mostar in Bosnia after a horrific war of religious and ethnic division.  The music center he runs and concerts and events that he organizes are for everybody, no matter their background, and use creative arts as the conjoining factor which allows people to experience a commonality with folks they wouldn’t otherwise interact with.

These written stories, as well as the others in ‘Stories of Music’ are easy to relate to. I think most people have been a part of or have witnessed how music can lift spirits, assist grieving and bring people together. I’m sure that most people can agree that the power of music truly is incredible!

Holly E. Tripp certainly knows the power of music. She shares a couple of her own experiences in the preface of ‘Stories of Music’. Even before the preface, though, it’s explained that “10% of book proceeds will be donated to Hungry For Music and Music & Memory,” so Holly clearly supports the ideal of music being a part of everybody’s lives.

Having already known about Music & Memory through the Simply Music community, and knowing the incredible things that program is accomplishing for elderly people living with Alzheimer’s, dementia and other challenging conditions, I was thrilled that it’s being supported through this book. I have seen the videos showing these elderly people pretty much coming back to life after hearing music from their past and how this is such a gift for their families.

I hadn’t heard about Hungry for Music. Through the provided link, I was able to view the website and learned that Hungry for Music is getting children, who likely would not otherwise get an opportunity to learn to play an instrument, involved in music lessons.  These children are given a high quality musical instrument to keep and are connected with an instructor. Seeing this cause supported through sales of ‘Stories of Music’ is something I gladly stand behind just as I do for Music & Memory.

Purchasing “Stories of Music” is win-win, as the stories are incredible and donations will be made to two amazing organizations!