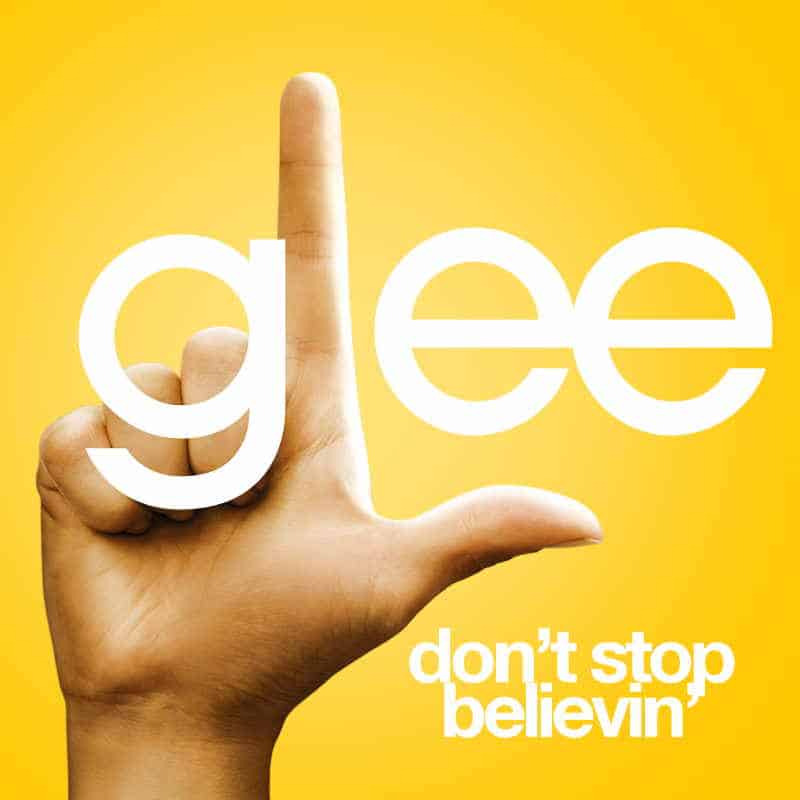 The Glee phenomenon has been one of the biggest musical stories of recent times. This runaway television success has spearheaded a rediscovery of songs you can really sing, and has reminded many people that a memorable melody and well-sung harmonies can be one of the most uplifting listening experiences you can have.

The simplicity of the chord progressions in many of these songs gives us the opportunity to lay down a piano accompaniment without too much effort. Maybe you could get together with some friends and be the musical director of your own glee club.

Don’t Stop Believin’ was originally a top ten hit for Journey in 1981. The Glee arrangement adds rich harmonies, but the tune remains the same and sounds fine sung by one person.

Rhythmically, you can play the whole song with a simple 1:2 ratio.

To play the chords, you’ll use the shape-based approach you’ve learned with your Simply Music teacher, starting with G major (straight line) and D major (triangle). The next chord, E minor7, is easily found by starting with the E Major’s triangle shape and bringing the middle note down by a half-step and the bottom note down by a whole step. The next chords are C major (straight line) and G and D again. The B minor is just the B major (curve or boomerang shape) with the middle note down a half-step. The cycle finishes on a C major, and we just repeat that cycle another four times.

On page 4 is the B section or bridge, which uses split or slash chords. For those who haven’t yet learned about split chords, they are chords where the left hand plays a different note than the right hand chord. Oddly, the left hand is written to the right of the slash, and the right hand to the left. You’ll get used to it, but be prepared to sometimes get it round the wrong way for the first little while.

The pattern for this section turns out to be very straightforward. The first four chords are just D, C, D, G with a C in the left hand. Then it’s D, G, D, G with a G in the left. Play these four times, then at the top of page 5 the section ends with a little tailpiece. The only trap here is that in the second measure there are three chords where you’d usually play two. just play the first two (D & G) once each and the C with the usual 1:2 ratio and you’re cool.

Then you’re back to lots of repeats of the A section, giving you a chance to sing your heart out!

Once you’ve mastered the basic accompaniment, there’s plenty you can do to make it more fun. You can make it more like the original by breaking up the chords in the right hand. Play the top two notes and then the bottom note.

If you’re a bit more ambitious, you could use the left hand to play a version of what the low voices sing. Essentially, they are just singing the bottom note of each chord, and finding a way of travelling up or down to the next. I’ll give you the first few moves, and you can work the rest out by ear.

From the G to the D, play A, B and D – really, you’re just moving up through the notes of a G chord, but passing through an A. From D to Em7, play E, F# (the bottom of the three black keys) and back to E. From Em7 to C, play F#, G, C. Remember that these are not the only notes you can play – if you want to play something different, or if you can’t work out exactly what the notes are on the recording, no problem, just play what sounds good to you. You’ll be in safe territory if you stick to white keys, with one exception – play the F# instead of F.

For the B section, it’s nice to really emphasize the difference by changing the rhythm. If you’re a Simply Music student, you might have learned the Arrangement for Ode to Joy. The same rhythm (1 + 2 + 3 + 4 +) is used here in the right hand. Meanwhile, the left hand can play its note 8 times per measure. It’s a great effect. Finally, for this section, here’s another way of playing the G chord which sounds better: from the D chord, just move the top two notes up to the next two white keys, so you’re playing (from the bottom) D, G and B.

I recommend you play along with the recording, to help make that rhythm slot easily into place.