March 29, 2017 isn’t just any ordinary day when it comes to the world of Piano. A worldwide group of likeminded individuals decided that because this day is the 88th day of the year it would only make sense to designate it Piano Day. The official site states the motivation is to “create a platform for piano related projects in order to promote the development of musical dimensions and to continue sharing the centuries-old joy of playing piano.” In that spirit it is only apt to find a way to celebrate the instrument in our own unique way. This year, in celebration of Piano Day, I want to take a look at some innovative, unusual pianos and keyboards that take the familiar instrument to unexpected places. There are many, many forward-thinking people who have engineered new ways to play the instrument, so let’s take a look at a few that jump out.

Arguably the most famous piano on this list due to its memorable scene in the Tom Hanks movie Big (1988), “The Walking Piano” or “Big Piano” was created by Remo Saraceni and first installed in the toy store FAO Schwarz in New York City in 1982. Saraceni saw the oversized synthesizer as a merging of dance, music and play, with the player using their feet to make music. There have been versions of the piano installed in museums, children’s hospitals and other public spaces all over the world. The version seen in the film was created specifically for the film and was on display in a museum in Philadelphia up until 2013. Versions of the piano are still in existence today, even home models you can buy online for a fairly reasonable price if you’re looking for some accompaniment using your feet while you play with your hands. 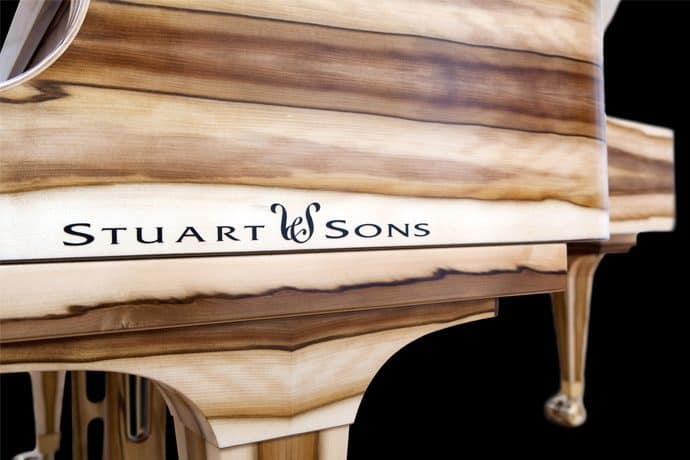 These pianos may not be as unusual as some of the others on this list – in fact, at first glance they might appear completely conventional, but a closer look reveals some interesting differences. Stuart & Sons have made remarkable pianos for over 20 years. Each piano is handmade by dedicated craftsmen to create something that is not only beautiful to look at but will have a resonating quality (pun somewhat intended). The company is driven by innovation and developing new, rich sounds with the classic instrument. Look beyond the beautiful skin and you may notice some differences. For starters, the Stuart piano has not two or three pedals, but four. Then you might do a little double-take when you look at the keyboard itself. They have extended its range to 102 keys – almost 9 octaves! The inventiveness goes right to the inner workings with features to increase purity and sustain. Innovation in pianos can still be found today and this company goes beyond the call to take the classical instrument to new levels of depth and beauty that any piano enthusiast can appreciate.

You can check out Gordon Harvey’s discussion with Wayne Stuart about his vision here.

Teenage Adrian Mann holds the Guinness World Record for the largest and longest working grand piano, and it’s a sight to behold. This beast took him 4 years to create, starting at age 16, even though he had no formal piano, lumberjack or carpentry training. The young New Zealander built the piano entirely by hand, and even by the creator’s own words it exceeded his expectations. The piano measures 5.7 meters (a little over 18 ft) long, a little over 18 and a half feet, and sounds as good as any piano you’d expect it to.

This keyboard was designed in 1882 by Paul von Jankó with the intent to address two limitations on a traditional piano. One of those issues is for pianists with smaller hands who have difficulty stretching beyond a ninth, or an octave. The other issue is the how each scale has different fingering so instead of a single row of keys there is an array of keys consisting of two interlocking manuals with three touch-points for each key lever. The columns are a semitone away from a neighbor column, the rows are one note away from a whole step from that note. For the traditional 88-key piano there are 264 keys total, with each note playable by three keys in vertical alignment. The keyboard never received widespread acclaim given that pianists were not convinced the benefits outweighed the skills needed to play on a traditional piano. Thus, the Jankó keyboard received only moderate success and is known mostly for its novelty in history of pianos.

This one may be stretching the definition of a piano a bit, but it sure looks like one. Invented by none other than United States founding father Benjamin Franklin in 1761, he was inspired to create this instrument after seeing people create music using glasses of wine. The Glass Harmonica uses half-spherical glass bowls of different sizes and arranged on horizontal spindle, set in motion with a foot pedal. The notes are played as the musician touches the rotating spheres with wet fingers. Yes, the player must have moist hands in order to play this instrument. However, it’s certainly not a gimmick, as it was used by the likes of Mozart and Beethoven for compositions, and is still performed on today.

As a pianist, have you ever been irritated by violinists who brag, “Oh, the piano is so rigid and expressionless – you can’t even do slurs!” And it’s true, string instruments can bend and glide at will, exploring microtones between the notes, while pianos have been stuck with fixed notes. Until now. Inventor Geoff Smith wasn’t happy with that limited state of tonal affairs, so he created a piano with a movable bridge for each string, allowing for any imaginable tuning and even the chance to bend notes as you play, like you were a blues guitarist or sitar master.

We’ll close with the Klavins-Piano Model 370. This behemoth of a piano gets its name from its inventor, David Klavins, and its height of 370cm (a little over 12 feet).  It debuted in October of 1987.  It was built by Klavins with the intent to experiment and explore new dimensions of piano sound. Klavins was looking at the new piano designs from the 19th century with the concert grand piano and trying to think of ways to revolutionize them in a similar fashion in the 20th century. But even Klavins admits that the piano is not perfect, still thinking that the acoustics can be improved, and possibly other aspects, but it certainly proves that innovators can still find ways to experiment for richer and fuller sounds for the centuries-old instrument by changing the scale by which we imagine it to exist.

Pianist Nils Frahm originally dreamed up Piano Day in part to assist Klavins in the development of an even bigger instrument, and as part of the project recorded some haunting works on the Model 370.

What are some innovative or strange keyboards you’ve seen? Have you ever played the Big Piano? Let us know in the comments!