Why Music Moves Us by Jeanette Bicknell – Book Review 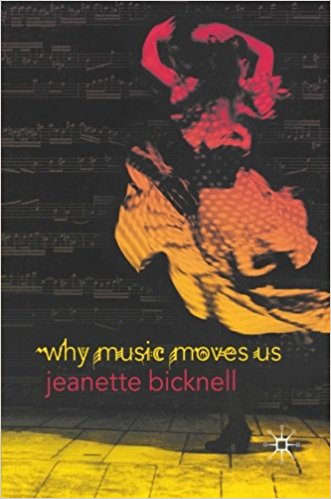 Just recently, I had the pleasure of attending a concert of the Australian Art Orchestra featuring Paul Kelly and his songs, arranged by Paul Grabowsky.  Australian readers might know enough to see the exciting possibilities of that combination – others will just have to hope they release a CD.  I can truly say that every note was a joy, but beyond that there were many ‘magic moments’, where everything came together to create an experience of the sublime.

That word ‘sublime’ is used like a motif throughout this book, and it’s a wonderful term to use to describe music’s unique ability to affect us deeply.  Music, at the right moment, has the ability to lift our heart, mind and body towards something beyond the everyday, and sublime is one of the best words I know to describe that effect.  Interestingly, a word like ‘sublime’ would not always have been thought of as applicable to music.  Bicknell points out that music hasn’t always had the same role in our lives, and changes in our culture through history have given us more ways to respond emotionally to music and explore the myriad levels on which it can affect us.
One of the valuable insights this book offers is about some of the assumptions we make, and it’s interesting to know that they weren’t always made.  For example, Bicknell points out that composers were once considered craftsmen more than artists, and that the first composer to be called a genius was Handel.  Initially, music was mostly seen as a vehicle for communicating words.  It’s strange to think that until someone suggested it, music itself wasn’t considered something that could “express truth that language could not”.

Bicknell highlights some of the functions of music that are universal across virtually all cultures, including in child-rearing, courtship and social occasions and rituals, and its ability to reinforce our sense of connection to a group, whether it be our football team, our religion or our country.  She also outlines recent research on music and the brain, finding that, although there’s a lot we still don’t know, it seems that music affects a very broad range of brain regions, and  that emotional and intellectual responses are processed in different places.  It’s also fascinating to read of research that identifies particular musical events that commonly stimulate particular physical responses.  So a melodic appoggiatura (a kind of musical ornament) is often associated with tears, and a sudden harmonic change is associated with chills.
Bicknell is a philosopher and I would understand if you found her analytical perspective a little dry, but the book is very illuminating when you read of individuals’ personal experiences while listening to music.  You start to appreciate that there are experiences of the sublime that are common across cultures.  Those moments can be found in classical and pop, jazz and world music, even musics that the listener barely knows.
Maybe some of music’s power lies in its mystery, and perhaps some of that power would be lost when the mystery is explained.  And in the end, do we really need to have these questions answered?  Of course not.  One of the things that makes music such a great contributor is its accessibility – we don’t need to understand it intellectually or be able to explain it for us to love it, although most musicians will at least say that knowing a bit about how it works enhances their appreciation of it.  Personally, I don’t mind that the question isn’t answered – the investigation itself is fascinating enough.

Buy the book on Amazon