When All Else Disappears, Music Remains 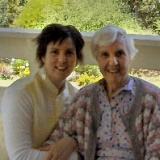 My name is Mel Karajas and I am the coordinator of The Playground. After watching the ‘Henry’ clip from Alive Inside and learning more about Music & Memory, I wanted to be involved in whatever way possible. In this special edition of our blog, that way right now is to tell you a story very dear to my heart.

Introducing Beryl Beveridge, my grandmother. She enjoyed music from a very early age but didn’t decide to take lessons until she was 15. She chose the piano but her parents could not afford the lessons. Having already left school to work and contribute to household finances, she paid for the lessons herself. At 21 (in 1940), she had saved 250 pounds to buy her own instrument, a pianola. The piano took pride of place in her parents lounge room and when she married, it moved with her to her own home.

She discontinued lessons, but never lost her passion for playing. My memories of her holding on tight to the sides of her piano stool and pedalling away to The Entertainer still bring a smile to my face! Even funnier was my younger brother and I trying to play with one of us using our hands on the foot pedals and the other on the keys pretending to play. But it was The Black Hawk Waltz that she adored, could play without sheet music and was part of her soul.

Skipping forward to her 70’s, she participated in plenty of community activities including ballroom dancing and exercise classes. Always a strong and independent woman, she wanted to be with her friends doing the things she enjoyed. This changed all too quickly. She was a little forgetful at times and became more fragile, but we hoped that this was just due to her age. It was when her usual bus driver came to collect her for Tai Chi that we noticed a serious shift in her behaviour. She failed to recognise him, said she had never done Tai Chi before and became verbally aggressive. Her family was called, my Gran was assessed in hospital and her health deteriorated rapidly. She was diagnosed with Alzheimer’s Disease and placed into a nursing home with 24 hour care.

Going to the home was an anxious experience for me. I was so used to Gran being alert and vibrant, now she wasn’t and that upset me greatly. We’d sit on the couches next to the radio, not speaking and she’d listen to classical music. Sometimes, she would ask me questions about when she was going home … to the house of her childhood 60 years ago. I didn’t have any answers so instead, turned her attention to the piano that was in the sitting room. Only once did she take me up on the offer to play, but I’ll never forget it … The Black Hawk Waltz. Even though she was calling me my Mother’s name (Karen) but also knowing I was Melanie and she didn’t know what year it was, she still remembered how to play this piece. Amazing!

She remained in this home for 7 years and still occasionally came to family gatherings. The last Christmas that she was able to leave the home was where we were able to film a gem. She had been almost silent for hours, then, out of the blue, got a gust of energy and sat herself at the piano … her pianola, now at my Mother’s house. After madly scrambling for a camera, here is what we saw:

She passed away in February 2012, but telling this story out loud is still very powerful for me. The connection we all felt while Gran played, shows me the power music has not only for Alzheimer’s patients, but also their families.

Click here to find out more about Music & Memory in Australia, and here for the USA.