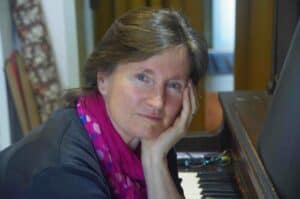 The far-flung farming community of Wal Wal, in western Victoria, Australia, may seem an unlikely place for an artistic and community leader, but Unmani breaks the mould in many ways, from pioneering belly dancing classes at her farmhouse to roping rock climbers into rock and roll. She has brought the arts, and especially music, to countless people who would otherwise never have had the opportunity or never had considered themselves capable. Unmani’s passion for shared self-expression is deep-seated and boundless.

Unmani is brimming with ideas for community engagement, such as her “Play Piano in Ten Weeks” festival event or organising a sixteen-piece band for her students to play with. In this interview she talks with Georgina Williams about her many triumphs and her ever-ready willingness to “give it a go”.

We end the interview with a recording of Unmani playing a Simply Music piece by Neil Moore called ‘Now and Ever’, to which she has added her own poignant lyrics. She explains: “I loved learning ‘Now and Ever’ and was inspired by the birth of my 6th grandson Satchin to write some lyrics. It was a homebirth and very simple and I was struck by how eternal it seems to gaze at a newborn”.