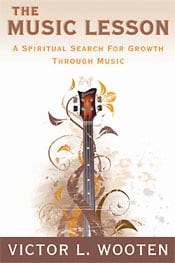 Anyone who knows of Victor Wooten would have to put him in their list of greatest bass guitarists of all time. As a bass player myself, I regularly find myself dumbfounded by musical feats I have absolutely no idea how he performs. it’s no small achievement that he can make the bass as legitimate and exciting a solo instrument as any other, but that doesn’t make him a show pony either; his playing, whether soloing Amazing Grace, working with Béla Fleck or in partnership with other Bass Giants, is as soulful as anything you’ll hear.

So it was with excitement that I found he’d written a book, and one which had been hailed as unique and inspiring, although I wasn’t prepared for how different it was. For starters, it takes the form of a story rather than an instructional volume. And it’s a most surprising story, describing his encounter with a mysterious man he discovers has found his own way into his apartment with a mission to revolutionise his relationship to Music. Like Carlos Castaneda’s Don Juan, the charismatic, unpredictable Michael speaks in riddles and performs miracles to the incredulous Wooten, slowly working his way under his skin and breaking down his preconceptions.

For Michael, a person doesn’t create music, Music is a universal vibration which he or she accesses. In that sense, he’s doing the opposite of teaching Wooten how to play, and he frequently berates him for asking him to “teach” him something; rather, he’s helping him tap in to Music in a way that simply reveals the music that is already there. Often this can turn into a wider discussion for Michael (plus a variety of equally odd friends), leading Wooten into explorations of the nature of life itself, and the perspective that Music and Life are one and the same thing.

If you are after a “meat and potatoes” guide to improving your skills, you may find yourself viewing this book a little cynically, although along the journey Wooten relates episodes that you can adapt in a practical way to your own playing. In the chapter on rhythm, there is a nifty activity that can really hone your sense of the beat, although in typical style Wooten’s account takes the experience way beyond what you would probably consider possible. To me, the manner of providing these tips within a story is interesting in itself. Many psychologists and social researchers nowadays recognise the value of storytelling as a vehicle for learning, and I must say that, although you do have to read a lot to gain a small amount of practical advice, I found such advice memorable and inspiring in a way a book of exercises wouldn’t.

Still, I think the real value of this book is the perspective it offers of the universality of things; of Music being something we don’t actually create, that is just there and available to us if we are open to it. Even if they aren’t true, concepts like the power of silence and deep listening, and allowing the Music that already exists to emerge, make a really liberating and empowering way to approach creativity, and not even just music. Without doubt Michael’s oblique observations apply not just to the bass but to any instrument, and probably to any endeavour, artistic or otherwise.

I found myself wondering why, with his superhuman abilities, Michael and his mysterious friends bother with spending their time helping someone play music better. I know very few people who appreciate the value of music more than me, but if I had the capacity to, among other things, miraculously heal the sick, I think I would make playing an instrument a second priority.  Still, who am I to question these people with apparently divine capabilities? Wooten certainly didn’t get much value out of challenging them.

Is Michael real? Was Wooten channeling him? Is he just a figment of Wooten’s imagination? I dip my hat to that imagination if so, but either way I don’t really mind not knowing the answer to that riddle. It’s the questions that really move us forward, and this book asks lots of them, in an intriguing and engaging way.