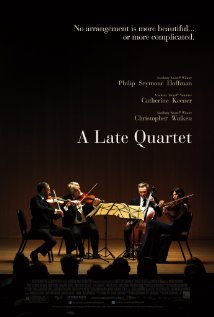 An outstanding ensemble cast and the overriding theme of passion, both musical and romantic, make this movie a captivating experience. The Fugue String Quartet is celebrating its 25th anniversary just as the senior member and cellist, Peter (Christopher Walken), is diagnosed with Parkinson’s disease. The ensuing drama centers on the future of the quartet, the possibility of reinvention, both musical and personal, and the sacrifice necessary to lead a musicians life. The choices made by each quartet member reveal their underlying fears, regrets and desires. First violinist, Daniel (Mark Ivenir), formed the quartet after deciding that the life of a soloist, changing orchestras and conductors every week or two would ultimately be musically unsatisfying. Second violinist Robert, (played by the ever-awe-inspiring Philip Seymour Hoffman), abandons hope of studying composition and modern music in favor of a life with the beautiful and talented violist, Julia  (Catherine Keener), a second-generation string quartet member.

The film spoke to me on several levels. For any of us who have wondered if we could have had performance careers, it was affirmation that leading a full, rich and varied life while touring the world (even assuming it is done in pursuit of musical passion and fulfillment) is nearly impossible. The cost usually comes in the form of damaged or non-existent personal relationships. The sheer joy of music-making in a group setting at the highest levels of achievement is a central theme in this film and made me want to run out and join a band or choir or at the very least start attending chamber music concerts. It also provided a glimpse at the compromise required to keep four musicians together for a long period of time and made the career of even pop legends like The Beatles seem truly remarkable. Talented, creative people will inevitably disagree about how to be self-expressed and the need to make everyone feel valued and free must require a mind-blowing set of interpersonal skills. (This reminds me that I have always felt Neil’s greatest talent among so many is his psychological acumen!)

There are several fascinating group and individual coaching sessions portrayed in the film where quartet members are guiding music school prodigies. In one scene Peter recalls playing poorly for Pablo Casals and receiving warm praise nonetheless. Years later he asked Casals why and learned that he focuses exclusively on the things he did RIGHT.  There are good lessons here on the need for encouragement even more than correction, for those brave enough to take this journey.

I had watched the teen flick about a cappella groups, Pitch Perfect, with my daughter just before viewing A Late Quartetand was struck by some interesting similarities. In both films ensembles were led by hard working, rigid personalities who feared change and resisted all attempts at breaking out of the box. For the acapella group, this meant avoiding the thrill and uncertainty of improvisation and remixes and for the quartet the opportunity to increase expression and connection by playing from memory. I was reminded of a Simply Music conference years ago where Neil invited a volunteer teacher to come forward and sight-read an unfamiliar Chopin piece of great complexity. After executing this feat perfectly the teacher admitted that she was classically trained and read extremely well but prior to discovering Simply Music had no relationship with the piano, but only with the page.

Soaring without a net may be scary, but the thrill is worth it, and so is this film.

For another interesting look at the inner workings of a string quartet I recommend the excellent novel , An Equal Music by Vikram Seth. Warning: it is also a love story as are many musical tales. Musicians are just plain passionate!!