How often have you watched a movie and not noticed the music? Obviously you’ll pay attention if it’s about music, or the kind of movie where the stars regularly break into song, but a typical movie is likely to have music playing for half or more of its length, and a lot of the time we simply don’t notice. And that’s the way the music is usually designed – not to be ignored, but to be such an integral part of the drama that it blends with the acting, dialogue, visuals and editing to make up a total, multi-sensory, immersive experience. But try taking away the music and you’ll know how important it is.

Lyndel Kennedy’s popular Play-a-Story program is all about images and music. It was conceived when Lyndel was listening to her favorite music while her 4 year old daughter Josephine was in another room. Lyndel turned the music up and escaped into a scene she imagined for the music. It was beautiful, yet tragic.

She opened her eyes and noticed her daughter sitting in front of her with tears streaming down her face. Asked if she wanted to stop the music, Josephine simply said, “No… I love it mummy!”.

They cuddled up on the couch, and as the music continued, they made up a story… ’just imagine the music is a butterfly, lost in the forest.’ As the music progressed toward hope, so the butterfly was found, and on the story went. This became a regular time for them, listening to music and making up the story they imagined the music was telling.

As well as conjuring images in our imagination, music can have a profound effect on how we perceive existing images. Lyndel often shares an activity with parents where she plays a movie of a carousel with two different soundtracks. Depending on whether the music is the pretty and carefree first selection or the ominous second selection, the same footage occurs to the viewers in very different ways. They notice things they hadn’t noticed before, and have a very different emotional response. Like a movie, music tells a story, but in a uniquely abstract way, and this, I think, is what makes it such a direct link to the emotions – music bypasses the intellect to manipulate how we feel about what we see. 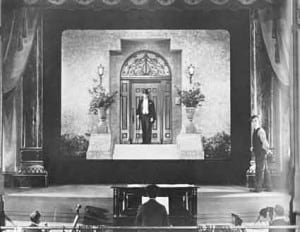 In the early days of “silent” film, music was effectively its equal, playing a crucial role in reinforcing the story before we had the luxury of spoken words to help us understand what was going on. Essentially, the film provided the action, but the music was crucial in revealing the emotion behind the scene. We’ve all seen snippets of old movies with the bad guy tying the heroine to the railroad track to the tune of a piano playing rolling diminished 7th chords rising in half-steps, conveying the tension as surely as a narrator as the train steams towards them. In those days, a skilled pianist would play the soundtrack live in the theatre, and the effect was at least as powerful on the audience as the most big-budget CGI spectacular of today.

In the 1920’s, technology made it possible to record sound along with visuals. In these new “talkies”, dialogue became the main driver of narrative, and initially music was mostly used much like it had been employed in stage musicals. Orchestras were employed to accompany song and dance routines in the enormously popular musicals of the day. But the role of music to set the scene and accompany drama and action couldn’t find a place in the earliest sound films.

A new window was opened when Max Steiner was engaged to write a score for the monster movie King Kong. In a way, the need to convey emotions in a wild animal that couldn’t speak took Steiner back to the needs of the silent era, but this time, with the aid of an eighty-piece orchestra, he was able to employ many more musical tricks, borrowing from some of the great classical composers and orchestrators to create an elaborate and powerful soundscape. He used a mechanical technique to precisely synchronise the music to the visuals, allowing him to closely follow the rise and fall of the action, punctuate dramatic moments and heighten the emotional message of key scenes. The movie was a hit and the music was considered a big part of its success. As Steiner’s biographer Tony Thomas put it: “It was his score that literally makes that film work. As soon as the audience hears that three-note theme—those three massive, darkly orchestrated descending chords—it knows it is in for a fantastic experience”.

Try watching this scene to observe some of his tricks: the three-note chromatic theme representing the airplanes getting louder as they approach; the four-note chromatic theme for Kong, rising as he climbs the building, and pausing as the film cuts to the scene on the ground; the massive chord and cymbal crash as Kong reaches the top; everything very discordant and dizzying.

Thus was born underscoring – the art of using music underneath the action to underscore the drama. The formula Steiner created has been followed and developed by many great composers ever since, for everything from horror to romance.

Although music works in service of the action, that doesn’t mean it’s second-class – it needs to serve very specific purposes and the composer must consider requirements that are unique to the medium. The action and plotting have a flow that may be totally unlike the usual rhythm and mood development of regular music. A melody may need to be evocative but not so catchy as to distract the viewer. Yet some of it can stand on its own. John Williams’ Schindler’s List or Ennio Morricone’s The Mission are justifiably famous and have become part of the concert repertoire.

A more recent development has been using popular songs in place of bespoke scores. Certainly songs have always been used in movies, whether composed specifically for them like “Moon River” for Breakfast at Tiffany’s (1961) or performed in the film such as in musicals, and sometimes becoming part of the story, like “As Time Goes By” in Casablanca (1942).

But a new approach was explored in Easy Rider (1969), taking contemporary music unconnected with the film and inserting it straight into the scene, more as a cultural statement than to aid the plot. It set off a wave of influence that is still seen today, whether you’re looking at the recent American Hustle (2013) and its heavy use of 1970s rock and disco to set the scene, or any of Quentin Tarantino’s films as he takes music that doesn’t even belong in the eras he is representing on film, but sets the tone (a la Django Unchained (2012) and its liberal use of contemporary hip hop). Many songs have been reinvented and found their claim to fame from being used in a film, re-launching the careers of many bands and musicians or giving them a new-found audience.

As one example, Lost in Translation (2003) features the song “Girls” by Death In Vegas. Upon first listen this song could’ve just been ambient orchestral music composed for the film, but the song “Girls” comes from the 2002 album ‘Scorpio Rising’ and is used for a moment in the opening of the film, cleverly blended with the sounds of the city. Its inclusion immediately establishes something to the viewer about Bill Murray as he awakens in the back of his limo, driven around the streets of Tokyo and adapting to the new time zone and culture. It’s our first introduction to the character and the song on its own sounds like waking up, the fuzz of the guitars bursting into the heavenly vocals that contain no lyrics but intend an ascent of some kind, with a hint of ominousness. The full track expands on this further than the brief snippet in the film. It’s atmospheric, much like the film. Both the song and the film are on the same tonal level, that less is more and sometimes you don’t know what kind of ride you’ll be taken on.

Whether it’s orchestral scores that tug at the unconscious or pop songs that plug us in, music is a crucial part of a film’s ability to take us out of the everyday and into a heightened alternative reality. We don’t usually have a full orchestra highlighting the ups and downs of our day, but if we did, it would be interesting to see how much more intense life might feel. As composer Hans Richter observes, “I’ve made 100 movies or something, and I still go, ‘So, why are we having music because a man’s walking down the street?’ It doesn’t quite make sense, but at the same time, I suppose movies are a dream and in a dream you can have music”. A lot of men have walked down a lot of streets in the past century or so of movies, but it’s the music that keeps us wondering what will be around the corner.

We’d love to know your favourite film score. Leave a comment with your nomination, and just why you think it’s so effective.