In the Key of Genius: The Extraordinary Life of Derek Paravicini by Adam Ockelford – Book Review 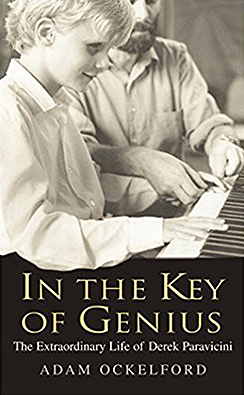 Derek Paravicini is one of those individuals who open our minds to the world of what’s possible, just by being naturally himself. He was born very premature, and as a result grew up with an array of disabilities, including blindness, learning difficulties and autism. But, miraculously, he discovered very early an affinity for music. He would spend hours attacking his small keyboard with fingers, arms and elbows, pounding out his own complex versions of tunes he had heard a little as once.

At around 3 1/2 years old, he visited a school for the blind. Hearing a piano lesson going on, he broke free from his parents, shoved student and teacher out of the way, and launched into a typical playing frenzy. The teacher was Adam Ockelford, who was so astonished by Derek’s unique gift that he took him on as a student, and went on to become Derek’s long-time mentor and life coach. He also went on to write this book, which, as well as being Derek’s biography, is also the story of their shared struggle to mould Derek’s amazing talent into something manageable and of value beyond his own inner domain.

It also talks about the role of music in Derek’s life, and the way it replaces those communication skills that most of us take for granted, but which elude Derek. In one very moving passage Ockelford describes helping Derek express a state of frustration by duetting with him, guiding him through a journey in which they took “Ain’t Misbehavin'” to dark and dissonant places, through a slow and sustained phase, before finally arriving at a happier version of both the song and Derek.

Ockelford writes in the first person and brings the personal experience of his time sharing Derek’s unique world to life. He has worked tirelessly over many years to have Derek present himself to the world, not as a novelty, but as a true musician with something unique and genuine to offer. Yet we can barely imagine how the world must occur for Derek – music is a very different place for him, where, as Ockelford explains, each note has a distinct personality, blazing in technicolor. It’s as though every expressive experience the world offers that he can’t access is directed toward music, making it come to life with sights and sounds that the rest of us can barely conceive of. He is still incapable of looking after himself, struggling even with telling left from right, yet music allows him to, as we say, go forth into the world and be wonderful.

Buy the book from Amazon.com