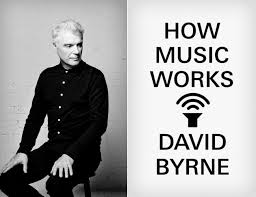 Let me say from the outset that David Byrne is one of my all-time heroes. I may not have pursued music at all without the revelations that were Remain in Light and My Life in the Bush of Ghosts. From his early career in Talking Heads through his love affair with latin music (both as a musician and a label founder), film and theatre soundtracks to innovative art installations, Byrne’s restless creative spirit has made his work exciting and ever-changing. So with an author like Byrne, and a title as ambitious (and probably deliberately ironic) as “How Music Works” this book was bound to be thought-provoking at the very least.  Part autobiography, part guidebook, part philosophical discourse, it ranges across just about every subject a curious musical mind might explore, from the realities of making a living to speculation about celestial origins of sound. I was especially thrilled to learn more about the unique way Byrne works, and in particular detailed accounts of the groundbreaking, idiosyncratic process of building the tracks on those two seminal albums I mentioned earlier. It felt to me really affirming to know that any means you choose to go about creating something is valid, and to appreciate through his descriptions of the highs and lows of his career that even an artist like Byrne struggles and fails at times. Switching to a more prosaic but equally useful subject, Byrne outlines an array of models a musician might choose from to distribute and market his work in the digital era, and gets real about money and survival as a professional. Pleasingly, he also gives time to the neglected world of amateur music-making, lamenting the diminishing value of music as social glue, and he is  scathing of the proclivity for people of influence to favour ‘high arts’, as if there was something inherent in certain forms of music that elevated their social worth above others. For Byrne, the creative act can’t be separated from the social, technological and historical context within which it happens. This is a valuable thing to appreciate because, among other things, it reminds us that whatever music we make is legitimate and can make a contribution. His views are at the same time down-to-earth and inspiring. Music is one of the most uniquely human acts we can perform; it belongs to all of us and is cause for celebration. Buy the book